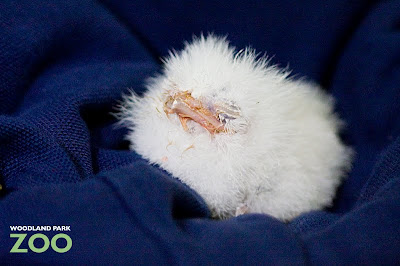 This tiny, white puffball is a tawny frogmouth chick that hatched at the zoo on July 11. When our first ever tawny frogmouth chick hatched last year, internet users raged in debate whether it looked more like a furby, a cottonball, or a tribble, but it’s actually a nocturnal bird native to Australia and Tasmania. Seen here at five days old, the chick still sports downy feathers, but soon it will start to acquire its flight feathers and darker contour plumage that acts as camouflage, blending into the color and texture of tree bark.

Under its parents’ attentive care behind the scenes at the zoo, the chick is now gaining 15-20% of its body weight daily so supplemental feedings are no longer required. The parents and hatchling will remain off public exhibit to allow staff to monitor parental care and ensure regular feedings by the parents. 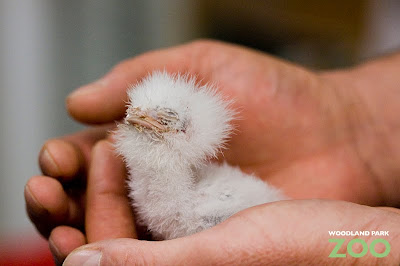 The hatching is significant for the zoo population in North America. This is only the second tawny frogmouth chick ever hatched at Woodland Park Zoo and one of only nine frogmouth hatchings in four zoos in North America this year.