Our five Humboldt penguin chicks have joined the adult colony and can now be viewed on exhibit during zoo hours. To get them used to being in the water before they debuted, the chicks had round-the-clock access to a shallow pool behind the scenes at the exhibit where they could practice floating and swimming in a more controlled and less crowded environment. See them in action here…

The youngest of the chicks, a male hatched to parents Diego and Radar on April 25, is in need of a name and we’re asking our online fans to help. 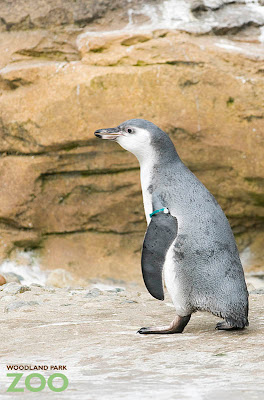 Fans can submit name suggestions for the chick to the wall of our Facebook page beginning July 7 through July 8, noon PST. To honor the Humboldt penguin’s Chilean and Peruvian native range, fans are encouraged to submit Spanish-language names. Penguin keepers will select their three favorite names from the submissions, and fans will then vote on July 9 on the zoo’s Facebook page for their top pick. So start thinking up some name ideas tonight!