Urgent update from the field: Fire hits Cranes of Asia 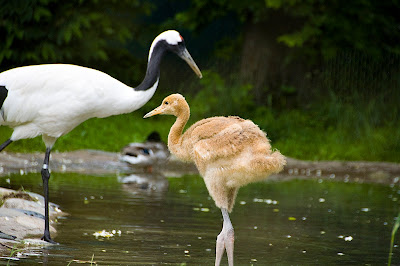 While we celebrate the hatching of our new red-crowned crane here at the zoo, our Partner for Wildlife Sergei Smirenski of Cranes of Asia reminds us of just how precarious the balance between habitat and population is in the wild. Recently he told us of a devastating fire that burned through 90% of Muraviovka Park, a protected area of critical crane habitat in the Russian Far East. 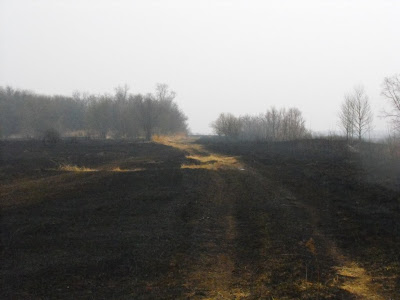 The Amur region of Russia is an important nesting ground for the endangered red-crowned crane. Muraviovka Park was established in part to protect the diminishing wetlands which serve as a critical habitat for the crane, with an estimated population of only 2,700 left in the wild. Due to an ongoing drought, fires started by hunters or nearby farmers can present a potentially habitat destroying event that takes an already endangered species even closer to the brink.

And that is exactly what happened on the afternoon of May 2 when smoke appeared on the horizon. According to Sergei, lunchtime brought about increasing winds and a fire line to the north. Fortunately, the fire was heading in the opposite direction of the breeding habitats and it was hoped the fire would pass without any damage to the park. But in the course of a minute the wind changed, and the fire that was headed away from the park turned to the east, with a direct line towards the wetlands, the breeding grounds, and the Cranes of Asia headquarters. 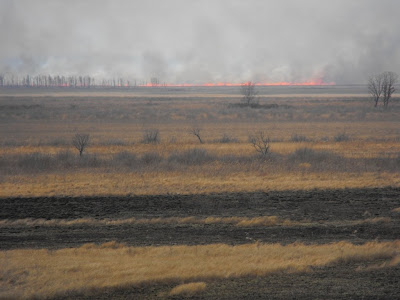 Fires in the park are fought largely on the ground as there is no easy way to bring a fully-loaded water tanker into the wetlands. Within three to four minutes, the fire that was 7 kilometers away (approximately 4 miles), was within 300 meters (approximately 320 yards) of the headquarters, and moving fast. Volunteers were recruited to begin the fight, and eventually the fire was stopped within 50 meters of the house, camp, and cabins. In the course of the 5 hours the fire was burning, approximately 90% of the park was destroyed. 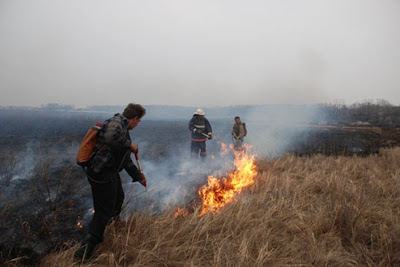 The cranes that had just the week before become secretive about their nests because incubation was taking place were now walking among the burned out ruins aimlessly. Sadly, it was too dark, and too smoky to find the nests and save any eggs. This year promised to be one of the best breeding years ever, with more cranes, storks, rails, bitterns and other water birds than had been seen in the last 5-7 years. 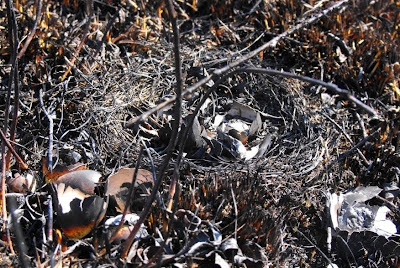 Yet despite the devastating fire, the park is beginning to return to normal. Grass has started peeking through the burned out ground, and it looks like two nests of red-crowned cranes, and two white-naped cranes may have been found.

But the danger is ever present, and in order to help the cranes, their habitat, and our partner, we have offered to assist them with their prescribed burns to create fire breaks that would, in turn, protect the park from these sorts of events.

Here is what our conservation partner needs most right now:
- 30 water pumps for backpack fire extinguishers - $80 each
- 5 sets of fireproof clothing in order to get closer to flames to put out future fires before they rage out of control - $300 per set

If you can provide any support to the Muraviovka Park Fire Recovery Fund, it will help our Partner for Wildlife Cranes of Asia afford these basic fire-fighting needs, and help them to protect the habitat so necessary for these endangered birds. Please consider making a donation to the fund, or help spread the word by clicking on the “Recommend” button below to post this story to your Facebook network. Thank you for your ongoing support of the zoo and our conservation partners in the field.