As we shared earlier this week, Easter has delivered an early batch of eggs to Woodland Park Zoo – Humboldt penguin eggs, that is – and the first chick was discovered to have hatched on April Fool’s Day! 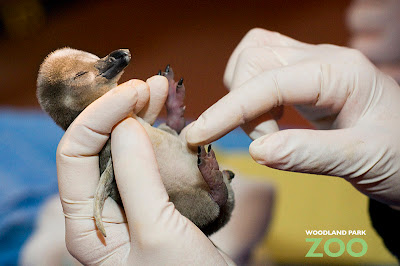 The first penguin chick represents the first offspring for mother Dora and father PJ, both 3 years old. The second egg in their nest shows pipping activity and is expected to hatch on Easter Sunday. The newly hatched chick weighs 2.1 oz.
Humboldt penguin chicks hatch with grayish brown, downy feathers, which molt into completely gray feathers when they fledge. It will be early summer before any of the chicks emerge from the nesting burrows and venture outdoors into the public exhibit for visitors to enjoy. 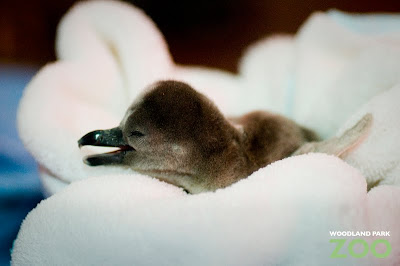 Over the last few weeks, three pairs of Humboldt penguins have been sitting on two eggs each in the burrows specially constructed for the birds in their new exhibit. At least two of the remaining four eggs are fertile. Staff plans to candle the eggs every two weeks to determine if they are fertile, alive and developing properly. The process of candling involves holding an egg to a high powered and focused light for just a few seconds. The incubation period is approximately 40 days. 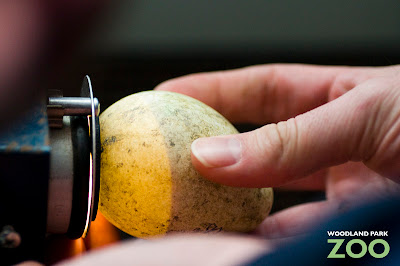 The eggs, six total in three nests, mark the first breeding and nesting season for the colony of 18 penguins since the exhibit opened last May.
According to Mark Myers, Woodland Park Zoo's bird curator, this hatching is significant for the penguin Species Survival Plan. Species Survival Plans are cooperative breeding programs that work to ensure genetic diversity and demographic stability in North American zoos and aquariums. Myers is cautiously optimistic that the chicks will thrive under the care of their parents. 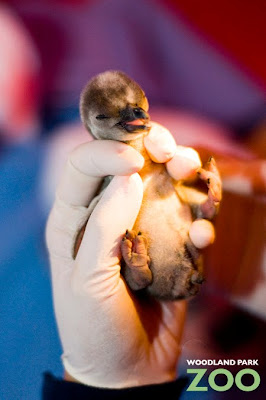 As part of the animal care protocols for penguin chicks, staff will attempt to weigh the hatchlings daily for the first five days or so. Myers tells us that as long as the chicks are achieving acceptable weight gains, they will remain under the care of their parents. It’s our goal to minimize staff intervention and allow the parents to raise their chicks and gain experience as parents. If necessary, keepers might offer supplemental feedings to chicks that fall behind the weight curve or if there is a large age difference between siblings.
Photos by Ryan Hawk/Woodland Park Zoo.

Anonymous said…
This is so exciting! I've been waiting to see if the eggs would hatch and hope to see more little, waddling babies soon!

Anonymous said…
Will there be a camera so we can watch them grow, either on the webpage or near the penguin exhibit?
April 8, 2010 at 12:52 AM

Woodland Park Zoo said…
Thanks, everyone!

As for the webcam--we're not able to host a webcam in this space, but we will be posting periodic updates on the blog and YouTube so you can see what's going on with the penguins behind the scenes.
April 8, 2010 at 11:49 AM