It’s no secret that much of the forest land in Sabah is being decimated in order to plant palm oil plantations—putting the Asian elephant and orangutan populations in decline due to loss of habitat. (Pictured below: a young elephant roaming in a palm oil plantation in Kinabatangan, Borneo). 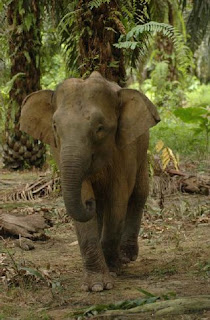 In 2008, Hutan began exploring the idea of developing community tree nurseries as an alternative source of income for village families. In May 2009, Hutan gave Hamidin Braim, a villager with experience in tree nurseries, a micro-loan to build a seedling collection center at his home and purchase seedlings from villagers. Hutan and Hamidin gave appropriate training to village families to collect wild seedlings of selected native tree species and raise them in plastic polybags at their homes. 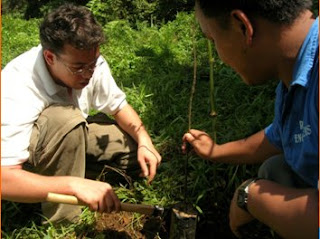 Fifteen tree species were chosen, all consumed by orangutans, and known to have relatively high survival and growth rates after being replanted. The Sabah Forestry Department has already confirmed that it has recently engaged in large scale forest rehabilitation work in forest reserves of the Sabah interior and that its demand for native tree seedlings will considerably increase for the years to come.

Community tree nurseries seem therefore to be viable conservation-oriented village development initiatives for the Lower Kinabatangan region and we therefore plan to replicate the Sukau nurseries model in the future.

(Hutan Asian Elephant Conservation, a research and conservation program in Borneo, is a Woodland Park Zoo Partner for Wildlife. The long-term goal of the program is to ensure the conservation of the elephant population of the Lower Kinabatangan and to reduce the rate of human-elephant conflicts through conservation research, local community involvement in managing natural resources, local education, and increasing awareness of elephant conservation needs.)
Photos courtesy of Marc Ancrenaz.