A rescued and rehabilitated golden eagle named Ranger will be the newest addition to the zoo’s Raptor Center, and today, he received a full physical examination by our Animal Health staff as part of the standard quarantine process for new animals. 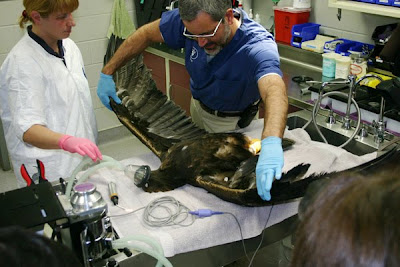 Ranger is estimated to be between three and five years old, and has been through a lot in his time. He came under the care of Yakima’s Raptor House Rehabilitation Center in 2008 when he was discovered with wing and leg injuries after sustaining electrical shock and later being struck by a vehicle. He also tested positive for lead poisoning. Eagles can unintentionally ingest lead fragments when feeding on animals that were shot. Poisoning also can occur through bioaccumulation when many animals killed by lead bullets are eaten. 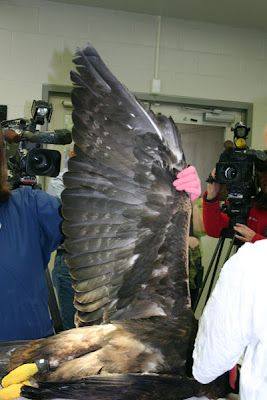 Due to his injuries, he cannot be released back into the wild, but we’re excited to welcome him to Woodland Park Zoo and to provide him with a safe, long-term home and excellent care. 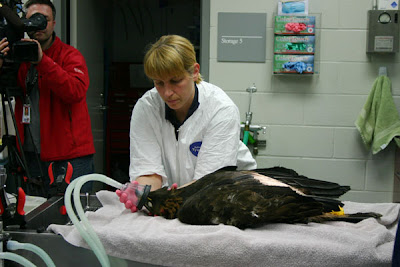 At the exam, the bird weighed in at 8.8 pounds, had blood drawn, received vaccinations and x-rays, and was closely assessed by Animal Health staff. The bird is doing well and will remain behind the scenes for a few more weeks until he is cleared for transfer to the zoo’s Raptor Center. There he will join the other raptors as a conservation ambassador for these magnificent eagles as well as for other wildlife impacted by lead contamination in our backyard and throughout the U.S. 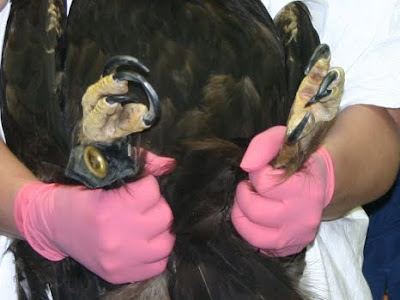 If you are a hunter or know a hunter, you can help species vulnerable to lead contamination, like eagles and other raptor species, by spreading the word that lead is poisonous to humans and wildlife, and taking steps like removing carcasses and gut piles and converting to non-toxic ammunition such as tungsten-alloy shot and solid copper bullets.