Break out the cake--today is our 110th birthday! 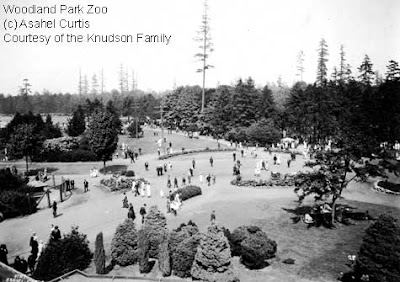 (Photo taken by Asahel Curtis from the roof of the old Primate House looking northeast, on July 4, 1924.)

On December 28, 1899, the Seattle City Council officially signed the paperwork purchasing the 141 acres that would become Woodland Park Zoo and surrounding parkland. Once owned by real estate tycoon Guy Phinney, the land and its collection of animals had become a burden for his widow after Phinney died in 1893, so it was sold to the growing city for $100,000 to be developed into a park.

The purchase was controversial as many believed the land, located 5 miles north of downtown Seattle, was so far out into the countryside that no one would visit it! But generations of families have proven that wrong as what became Woodland Park Zoo is now a fixture in the lives of more than one million visitors each year. Over the course of the last century plus, the zoo has changed from an attraction that merely showcased animals for enjoyment into an educational institution that is devoted to wildlife and habitat conservation here in the Northwest and around the world. 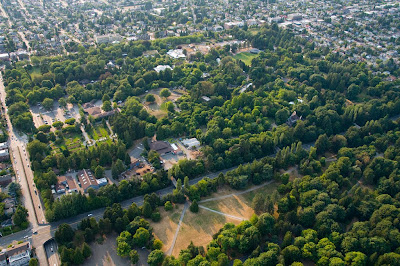 (Aerial view of Woodland Park Zoo taken in 2008 by Ryan Hawk. Since 1950 there has been a four-fold increase in the zoo's tree canopy and other plantings.)

Approaching the second decade of the 21st century, the mission of Woodland Park Zoo has never been more evident. As threats to wildlife have grown more complex, the need for the community's support and willingness to assist us by learning, caring and acting to bring real change for wildlife has never been more important. Thank you Seattle and our neighbors for the last 110 years. We hope to continue to evolve with our community to meet the needs of wildlife around the world long into the future.