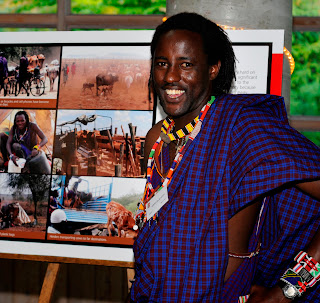 On November 12, the zoo lost a beloved staff member, Sammy Kiako Ole Sipoi, to a tragic motorcycle accident in Kenya. Sipoi had worked as a Maasai cultural interpreter at the zoo for two summers, sharing stories about his life on the savanna with zoo visitors, and bringing to life the real conservation issues of his homeland.

Paula Eggertsen, a close friend to Sipoi and former member of Woodland Park Zoo’s education staff, writes this tribute. We welcome you to share your thoughts and memories of Sipoi in the comments section.

The interpretation of cultural values and traditions is nearly impossible, particularly when you’re comparing cultures as different as a pastoralist and a capitalist society. What can easily translate are the qualities of human kindness. Sipoi embodied kindness.

When I first met Sipoi in Kenya in 2004, he rode the bus to Nairobi to greet my sister and me. It took Sipoi three hours of bus transfers, bumpy roads, and walking through a city wearing his traditional clothing to greet us. He immediately was attentive and thoughtful and surprised us by clearly speaking occasional English words. He was obviously extremely connected to his fellow warriors, to his family and to the Merrueshi community.

When we visited Merrueshi, he took us on long walks on the savanna, made sure that we had enough water, shade, that we weren’t trapped in the many acacia thorns, and that we had access to our cameras and backpacks containing various creams and lotions. He was amused by our poor night vision, but protected us from walking directly into bushes, holes and other obstacles at night. We were clearly out of our element and he took care of us.

(Sipoi pictured here in the middle.)

It was an honor when he gave both my sister and me Maasai names. Both in Kenya and in Seattle he referred to me as “enganashe,” or his sister. This was the ultimate honor to be considered a family member.

The closeness of communities whose members are part of a whole and look out for the well being of the group is something unique and wonderful. Sipoi and the Merrueshi community demonstrate values that would benefit our lives in America.

The loss of Sipoi is great on so many levels. He was a wonderful human, a husband and father, a comrade, an important community member, and a cross-cultural ambassador. He was extremely intelligent, well-educated, and held so much promise for great things to come.

I will miss my “olalashe” (brother) greatly. I am certain that members of his community are grief-stricken and suffering from his sudden loss. My heart goes out to my dear friend Kakuta, to Sipoi’s family, to his fellow warriors, and all who had the good fortune to know him well.

If you would like to contribute a memorial donation to Sipoi’s family, you can send a check made out to: Maasai Association, PO Box 868, Medina, WA 98039.

Namunyak AKA Christy said…
Dear Friend, we were blessed to know you. You were an extraordinary person. I cherished our Friendship, and I'll never forget You. Rest peacefully.
November 18, 2009 at 4:27 PM

Benjamin Doerr & Deborah Henderson said…
Sipoi, Kabole and Ken moved into the apartment next door to ours during their first stay in Seattle. We had the pleasure of getting to know Sipoi well, playing soccer in the nearby park and having what amounted to an open door policy between our apartments.

It was so wonderful to see Sipoi back in Seattle this summer and it bears a great weight of sadness on me to know that he is gone.

Our thoughts are with Sipoi as he journeys on, and with his wife and children.

beka said…
As a zoo member who treasured the one story telling session we made it to, I was so saddened to learn about Sipoi's death in the current issue of myZoo. In that single session Sipoi left a distinct memory of himself as so kind and so passionate about sharing the beauty of the savanna and the maasai culture. I grieve along with Sipoi's family and community, as well as those who developed friendships with him during his time in Seattle.
February 12, 2010 at 1:02 PM