Zoo in the World: Tracking the elusive snow leopard 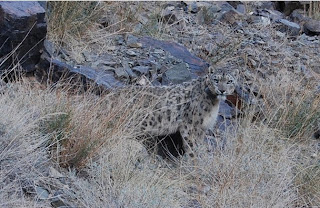 Summer is the busiest season at the Snow Leopard Trust’s research camp in the Gobi Desert of Mongolia. This summer our crew spent long days in the field looking for sites with recent snow leopard activity to deploy our trap cameras. By early July we had 41 cameras distributed over a 500-square-mile area, making it the most ambitious camera trapping study ever undertaken for snow leopards. The cameras remained in the field for a month; now we’re reviewing the images to see how many cats we photographed. Because every snow leopard has a unique spot pattern, just like a human fingerprint, we can use these photos to identify individual cats to estimate the size of the snow leopard population.

We’re also using GPS satellite collars to monitor the survival and movements of individual snow leopards. This summer we were hoping to recapture Aztai (pictured above), the first snow leopard collared when we began our study last August, to change out his collar before the battery ran out. At 5:00 a.m. on June 28, a transmitter was tripped indicating a capture was possible. The crew hiked out to the site and when we arrived we were greeted by Aztai’s luminous gray eyes! 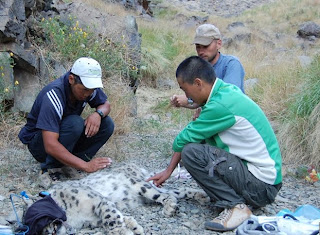 Seeing Aztai again was both rewarding and sobering. It’s exciting to know we’ll have the opportunity to follow him for another year, gathering information that will help us develop better strategies to conserve snow leopards. But we noticed that Aztai is missing a toe on his left front paw, possibly to a trap set for wolves by a herder. Even though snow leopards are protected and killing them is punishable by stiff fines, it’s difficult to enforce the laws in a country as large and with so little infrastructure as Mongolia. Although his paw is completely healed, it was still a stark reminder of the challenges we face in protecting this magnificent species. - KM

*Woodland Park Zoo and Seattle-based Snow Leopard Trust have worked together for more than 25 years to protect and study wild snow leopards and to improve the lives of people living in snow leopard countries. Learn more about this project and how you can help save snow leopards.

Photos by Snow Leopard Trust:
(Top) Aztai shortly after radio-collaring.
(Bottom) Interns Munkhoo and Sumbee examine Aztai as Ph.D. student Orjan Johannson looks on. Although the cats are an important part of their wildlife heritage, this is the first time either of the interns had seen a live snow leopard.

SnowLeopard said…
Wow! This is an inspiring program! I wish you all the best of luck finding snow leopards and gathering as much information as you can to help preserve the species~
August 19, 2009 at 7:30 PM