August 18, 2009
Posted by: Gigi Allianic, Communications
After nearly a year of nourishment and care by Woodland Park Zoo turtle experts, 53 endangered western pond turtles swam their way back into the wild when we joined Washington Department of Fish and Wildlife to release the turtles last week at wildlife refuge sites in Pierce and Mason Counties. 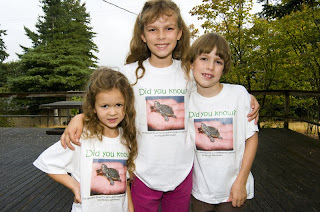 On hand to help release the shelled reptiles was 7-year-old Harrison Keyser of Sammamish, Wash. (pictured at left with his sisters) who arranged a “Turtle Trot” to raise more than $300 for the Western Pond Turtle Recovery Project. Harrison told us he thought “it was really cool letting the turtles go in the pond” and he’d like to do this again next year. We’d be happy to have you back, Harrison!

The 10-month-old turtles were collected last fall from the wild as hatchlings and head started at the zoo to give them an edge on surviving in the wild. Collection Manager Mike Teller and his keepers have a system for growing the turtles to just the right size:

“We mimic a summer season year round for the turtles by caring for them under lights and feeding them throughout the winter. By the time summer approaches, the juveniles are almost as big as 3-year-old turtles would be that grew up in the wild. This improves their chance of survival.” 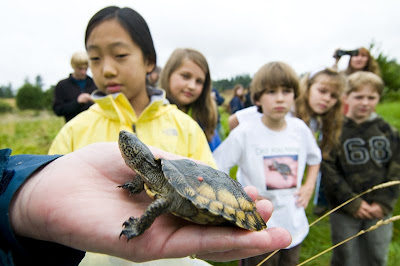 Once common from Baja, Calif. to Puget Sound, including the Columbia River Gorge, the turtles were virtually extirpated due to loss of habitat, disease, and predation by non-native species such as bullfrogs and large-mouth bass. They were on the verge of extinction in Washington in 1990, with only a mere 150 turtles left in the wild. The state listed western pond turtles as endangered in 1993. But the good news is, the Western Pond Turtle Recovery Project has helped boost the population of the species to about 1,500 in Washington state!

(The reintroduction of the turtles is part of a long-term, collaborative effort among Woodland Park Zoo, Oregon Zoo, Washington Department of Fish and Wildlife, and the U.S. Fish and Wildlife Service to prevent the extinction of the species. It also is a project of the NW Zoo & Aquarium Alliance, which promotes collaboration on regional conservation among zoos and aquariums in the Pacific Northwest.)
Photos by Ryan Hawk.