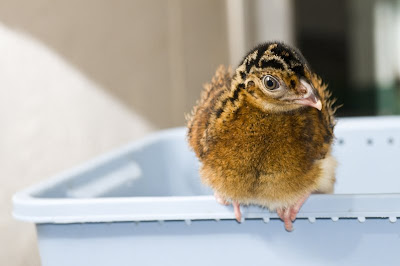 A Northern helmeted curassow chick hatched 6/26 with a little assistance from keepers since the chick wasn’t making much progress after 48 hours of effort.

It is now located behind the scenes in a brooder box next to its mother in the zoo’s Conservation Aviary in the Temperate Forest zone. By keeping it next to her, the chick should become more properly socialized and have less of a chance of imprinting on humans. To reduce imprinting, staff minimizes talking in the presence of the chick. 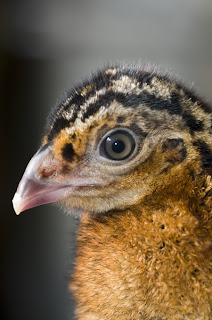 Like chickens or turkeys, curassow chicks are precocial at hatching—meaning they are born relatively independent—and with guidance, they learn to eat on their own very quickly. To stimulate it to eat, we use objects like tweezers or a long stick with a red tip to point food out to the chick.

These chicks are also very arboreal and they like to perch up off the ground. At hatching, their wing feathers are very well developed which allows them to take short flights at a very young age.

These chicks also grow relatively slowly (compared to other species like frogmouths or songbirds), and the chick now has a weight gain of ~5-8% per day. Its hatch weight was 133g (4.7 oz)…..10 times heavier than the frogmouth chick was at hatching!!

Curassows belong to one of the most endangered groups of birds in Central and South America. Many species are endangered due to habitat destruction and illegal hunting.