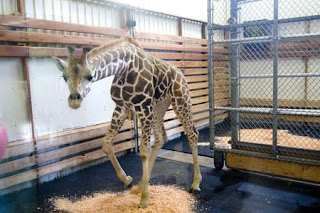 On June 23, Woodland Park Zoo became home to another significant addition…a bouncing eleven-month-old female giraffe named Tufani. She came to us from Dickerson Park Zoo in Springfield, Missouri. For those that remember, this is the same zoo that sent us Olivia, our other female giraffe. In fact, Tufani and Olivia are half sisters. And no, they don’t seem to recognize each other, but with giraffe, you never know.

Like Olivia, Tufani is a Rothschild’s giraffe also known as Baringo or Lado giraffe. Although she is not a Reticulated giraffe like our males, the Association of Zoos & Aquariums’ Species Survival Plan manages them as one sub species so we have future breeding recommendations already. But don’t expect to see any infant giraffe running on the savanna anytime soon as our girls are still a bit young.

If you’ve never seen a giraffe shipment before, it’s an interesting undertaking. I bet a few of you are wondering how we get them cross country. Do we fly them? Is it by semi-truck? How? And that’s a fair question. Think extra large horse trailer. The primary transporters we have been using have a specially built trailer that has a roof that can be extended upward if need be. This keeps the giraffe in an enclosed environment, away from the elements and, if the roof is cranked down some, allows the transporter to go under overpasses. The space is long enough for an adult giraffe to lay down if he/she would like or the giraffe can stay standing and just extend his/her neck. This is how both Olivia and Tufani arrived at our zoo. 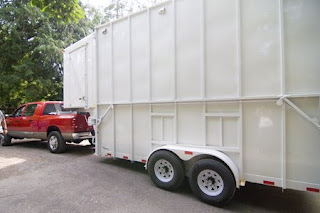 Tufani brings our current herd size to 2 males and 2 females. Even though giraffe appear gentle—and usually are—male giraffe will fight over female giraffe. So don’t expect to see all 4 on the savanna! So who does get to be with the females? Johari or Chioke? Chioke is the lucky boy. While doing our research in trying to find a suitable female for our herd, we contacted the studbook keeper and had her determine which of our males is more genetically valuable. And Chioke is the clear favorite in that regard. In fact Chioke is in the top half of most desirable males and Johari is ranked in the lower half of desirable breeding males.

Tufani is a small girl (but cute!). She’s also somewhat darker than her older sister—in fact, she’s darker than all of our giraffe. You’ll know her right away once you get a chance to see her somewhere around the end of July. Until then, she’ll be staying in the giraffe barn on the African Savanna as part of the standard quarantine period for all incoming zoo animals.