What first looked like a cottonball is now starting to look more like the adults of its species. At 20 days of age, the chick is doing great and achieving all the expected developmental benchmarks—it has clear eyes, its flight feathers are growing well and its weight is up to 5.9 ounces (it would take six stamps to mail it!). 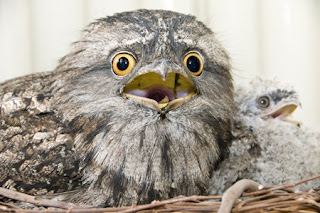 The first-time parents are doing well too. The male, shown here, has been sitting on the nest during the day brooding the chick.

The chick has been given the name Nangkita, an aboriginal word inspired by its native Australia meaning “place of little frogs.” It’s a fitting name given the bird’s wide, frog-like mouth.

Typically tawny frogmouth chicks leave the nest between anywhere from 25-35 days of age.


Photos and video by Ryan Hawk.