Dancing with the Aves 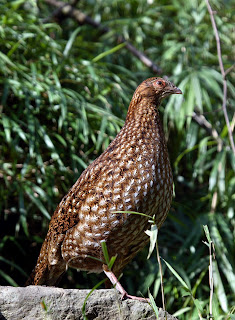 A, was lucky enough to be at the right spot at the right time. Prior to this short video taken in the walk-thru of the Conservation Aviary, the brown female Cabot’s tragopan (Tragopan caboti) was observed crouched low in the grass, pumping her wings (“wing whirring”); she was facing one of the large boulders in the center of the enclosure. The colorful male was on the other side of this boulder and began his frontal courtship display. This begins with the distending of his throat wattle until it hangs like a fleshy bib in front of his breast. Then he began pumping his wings up and down along the sides of his body. Bright blue fleshy “horns” emerged from the top of his head. As the wing flapping increased in speed, he stood as tall as possible and then charged around the boulder towards the female. This can be viewed in this 21 second clip.

Cabot’s tragopans are endemic to south-east China where they inhabit subtropical, evergreen broadleaf forest and mixed deciduous-coniferous forests at 600-1800 meters. This species is listed as vulnerable because it has a small population (estimated at 9,300 from a 1995-2000 survey) which is severely fragmented and undergoing a continuing decline owing to the ongoing conversion of natural mixed forests to conifer plantations.
For more information on this species check out Birdlife International page: