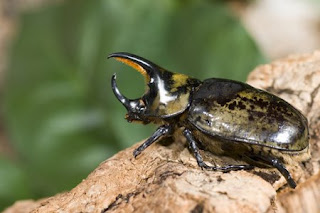 Looking every bit as fierce as their namesake, rhino beetles (Dynastes granti - AKA the Grant's or Western Rhino beetle) are making their presence known in Bug World. These beautiful American beetles are found in the Southwest and are often found around mercury vapor lights near gas stations. After living as grubs for two-four years underground or in rotten logs, these beetles, olive green with numerous chocolate to brown spots on the wings, emerge to eat pollen, ripe fruit, and tree sap. The male beetle has impressive black horns with which he defends the hornless female against other potential suitors. These beetles are at increasing risk of over collection, habitat destruction, and eradication due to increased incidences of wildfires as a result of global warming. Our first two males recently eclosed, the third generation of zoo- bred beetles from ova laid in July 2007. A female pupa is being watched with eager anticipation!