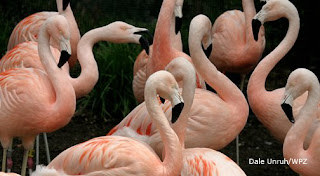 'Tis the season of the penguin...but the flamingos are still here and doing some really cool behaviors. This is their first full breeding season in the new exhibit and they are beginning to show some of their synchronized courtship/breeding behaviors. Things to look for are:

Head flagging: They all stretch their necks up high like they're trying to peek over a wall and then start turning their heads from side to side. At first just a few them are doing it, then more and more, and after awhile they are all in synchrony.

Wing saluting: At first it looks like one or two might be just stretching one wing or the other. One does it, then another, and as it progresses through the flock it gets faster and faster where each one is whipping out one or both wings and drawing them back in very quickly.

Marching/parading: While they are head flagging, the entire flock will begin moving in one direction or another and march back and forth across the exhibit. 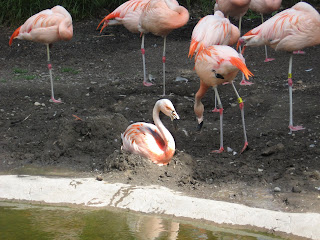 We expect these behaviors to increase in intensity over the season, but at this time they seem to be most active in the morning and late afternoon. Sunshine also seems to get them going, so on a cloudy or rainy day you might not see them being very active, but even if the sun comes out for just a little while they often react to it.
Hopefully this will all lead to nest building, egg laying, and baby flamingos.
Photos by Dale Unruh and Zoo Corps.