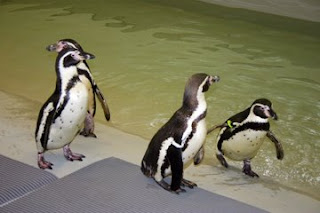 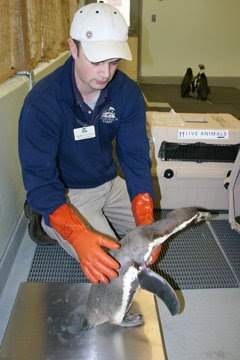 You said, "new exhibit opens on May 1 for the zoo member preview day"

Yes, the May 1 preview day is being offered to those who hold current, paid zoo memberships.

May 2 will be the opening day for ALL zoo visitors.

Anonymous said…
Very exciting--but what happened to the penguins that were in the previous exhibit?
March 24, 2009 at 6:54 PM

The penguins in the old exhibit moved to other zoos and joined new colonies when the exhibit closed last year.
March 25, 2009 at 10:49 AM

Josh said…
Good job going the extra mile and giving me the membership link! I'm buying one now. Had you not given the link, I wouldn't have considered it.

With our son turning 3 in a couple weeks, we'll be visiting the zoo at least a couple times this season and bringing family.
March 25, 2009 at 11:17 AM

How well I remember helping to raise little "Rotundo" in the 70's at the Zoo. There is nothing like the smell of herring thawing to inspire you in the morning. Have you guys figured out a way to get the fish scales of your hands and arms. I always found it a little disconcerting when later, say at a date, I would see one fall into my soup.

So many memories. I think I still have a few permanent marks on my fingers where Rotundo used to chew on them with his sharp little beak.