When it comes to conservation, it takes a village. Just ask the villagers of Tapoh, Thailand.

To help protect hornbills from poaching and deforestation, the Hornbill Research Foundation (HRF) in Thailand—a Woodland Park Zoo Partner for Wildlife—has been working closely with Tapoh villagers in the Narathiwat Province in southern Thailand to transition them into stewards of their own wildlife.

Guarding nests is especially important because hornbills tend to nest in large-diameter trees, which, unfortunately, are the same type of trees that are felled to clear the land for agriculture or wood products. 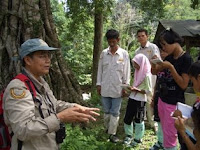 There’s good reason for the people of Tapoh to protect hornbills and their nesting sites: hornbills are seed dispersers, essential to the health of the forests upon which the villagers also depend.

As of 2008, over 50 participating Tapoh villagers guard more than 240 natural, artificial and hybrid nests. There are now some 40 breeding pairs of the six species in Budo-Sungai Padi National Park, with increasing numbers of fledglings each year.

And the former poachers? Now employed as guardians with sustainable income, they don’t need to return to poaching to make a living.

To find out more about the work HRF and Woodland Park Zoo are doing to research hornbill ecology and engage communities in hornbill protection, check out: http://www.zoo.org/hornbill