When FedEx pilot Captain Mark Abbott heard from his sister Jo Roach, a zookeeper at Woodland Park Zoo, that a special delivery was due to the zoo in December, he pulled some strings to get in on the momentous occasion: the arrival of Leonel, a 30-year-old silverback gorilla, via FedEx to Seattle (Leonel pictured left).
The brother-sister team is no stranger to great apes: Jo as a keeper at WPZ for 19 years and Captain Abbott who lived with his wife in Africa for years. But for the first time, their work converged as Woodland Park Zoo made preparations to ship Leonel from his last temporary zoo location in Columbus to his new permanent home in Seattle. 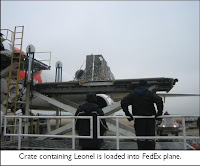 Leonel flew FedEx to Seattle in the company of a zoo vet and one of his new keepers-to-be, Traci Amerine. This very special cargo was novel for 14-year FedEx veteran Captain Abbott—he had flown with horses before, but never an animal quite like Leo. Though he could not see or hear Leonel while in flight, according to Captain Abbott, he sure could smell him! Partway through the flight, Captain Abbott did have a chance to take a break and meet Leonel under the supervision of Leo’s caretakers. “He was really calm,” said Abbott, who had the opportunity to feed Leo some treats and hear the gorilla’s vocalizations. 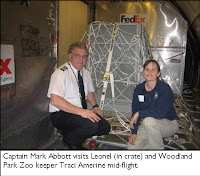 A smooth flight, the real challenge came when the plane landed at SeaTac Airport on one of the year’s busiest flight days, and in one of the worst storms of the winter. Faced with icy conditions, FedEx, SeaTac and zoo staffers worked extra hard to safely unload Leonel’s crate and transfer it to a truck bound for the zoo. It was here that Mark passed along the duty of Leonel’s care to his sister, Jo, who works as the quarantine keeper at the zoo’s animal hospital where Leonel is temporarily residing. 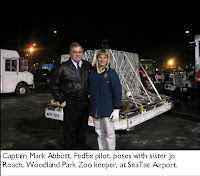 Leonel is slowly adjusting to his new home at the zoo. For now, he is staying in the quarantine space under Jo’s care. But once his vets give him the OK, he’ll move to a behind-the-scenes area at the gorilla exhibit where he’ll slowly be introduced to some of the females that will be his group mates. “Leo is getting comfortable,” according to Jo, who says he likes to call out to his keepers to keep track of their locations, a sign that he has the instincts to be a group leader. The gorilla keepers have been visiting Leonel, getting one-on-one time with him and helping him adjust to the new cast of caretakers in his life.
We hope to provide updates as Leonel settles into his home and the dynamics of our gorilla groups evolve to adjust to the presence of a new silverback.
Photos provided by Mark Abbott & Traci Amerine.

Claire-M. Lepage said…
You cannot know how much I loved reading this blog.
Leonel is my very special friend and I love him so much. I learned of his relocation only yesterday (May 7th) when I looked for Granby Zoo openning date this Spring. I'll miss him sorely. I know now that he is in good hands within your loving care, dear keepers.
Leonel is a very special boy!
I hope that you will write more blog posts about him and especially about his reactions to the ladies he'll be introduced to. It was a dream of mine that he would have the opportunity to pass on his precious genes.
Gorilla hugs to my Precious One and to you all at Woodland Park.

Woodland Park Zoo said…
It's great to hear from you Claire, and to know that Leonel has such a fan!

We hope to post more stories about him as he slowly slips into his new life here at Woodland Park Zoo. Stay tuned!