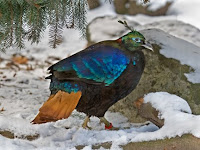 The national bird of Nepal has now made its way to Seattle.
New to the zoo is a pair of Himalayan monal (Lophophorus impeyanus) pheasants, donated by a private aviculturist from Burien. This species is endangered due to habitat destruction and overhunting for food.
Himalayan monals are typically found at elevations 9,000 to 14,500 feet from east Afghanistan eastwards through the Himalayas to Bhutan and northeast India and northward to Tibet. During the non-winter seasons, they prefer steep, rocky terrain with occasional grassy and scrub openings interspersed with woods. In the winter months, the birds descend to forested areas at lower altitudes where there is dense undergrowth.

These birds are on exhibit at the Conservation Aviary in the Temperate Forest biome of the zoo. The very colorful male is adorned with iridescent plumage that shows best on sunny days. Ironically with this rainbow of colors, what is most prominent during courtship display is the exposed white rump patch of feathers. The brown female is better camouflaged for safely incubating eggs.

We bred this species in the 1980s. The keepers at the Conservation Aviary are happy once again to exhibit this crown jewel of the pheasant world. Stop by and take in all his colors!
Photo by Dennis Dow