A new giraffe is here! 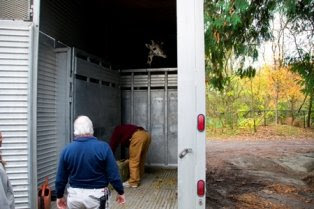 (Photo: The giraffe arrives in the trailer.)

The giraffe arrived early Friday morning after a three day trip and was quite feisty when we were unloading her from the trailer, letting us know she wanted out. And we all felt that was a good sign! 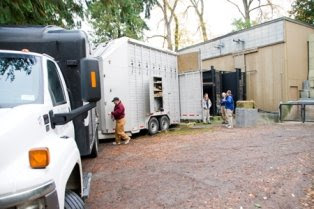 (Photo: The trailer is backed up to the loading chute)

For those that know the giraffe barn—the indoor space where the giraffes are kept when not out on the African Savanna—there is a load/unload chute at the back end of the barn. The animal transporter positioned the trailer in which the giraffe arrived against the transfer chute, opened the door, and after just a few hesitant seconds, she walked out of the trailer and right into the barn…just as if she had been here all her life! 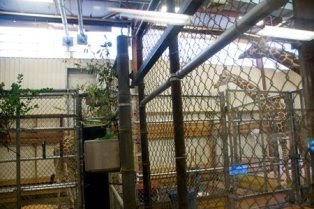 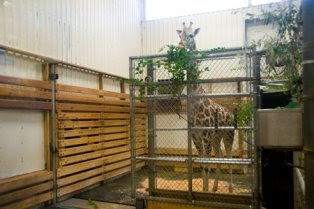 After she examined the boys for a bit, she started eating browse and settled in nicely. And three days later, she is still doing fine.

The new female is here to help Woodland Park Zoo participate in the Association of Zoos & Aquariums (AZA) Species Survival Plan breeding program for giraffes. Eventually, we would like for her to breed with one of our males, not only to build our herd, but to also add to the current AZA giraffe population. Of course, with her not being quite two years old, we do have a few years before we will see any giraffe births, but it's a start! We would also like to add at least one more female giraffe to our breeding group and are currently searching to identify another female to add to the group. 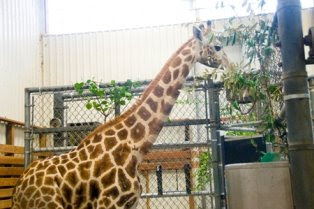 (Photo: The new giraffe inside the giraffe barn.)

For now, the new giraffe will be in standard quarantine for 30 days in the giraffe barn, but after that, you should be able to see her out at the giraffe barn (located near the hippo pool) and, eventually, on the savanna.

Anonymous said…
Thought your readers might enjoy a new TV show about zookeepers -- check out Living in Captivity on You Tube at http://www.youtube.com/watch?v=d4jBpTPDugM
November 18, 2008 at 12:52 PM

Anonymous said…
She looks happy and it will be fun to see her out interacting with her new "boyfriends."
November 21, 2008 at 12:00 PM

Anonymous said…
Hey, Anonymous, this is Anonymous also- the link you posted has been taken down, but I think this is the same show?

You're right; it's cute and there's some cute animal footage in it- I liked the goose chasing the two keepers- I wonder if that was intentional!
December 9, 2008 at 2:21 PM