Did you know in the 1970s, only 75 Rodrigues fruit bats were left on the island of Rodrigues, a district of Mauritius? But thanks to concerted conservation efforts, those numbers are now approximately 5,500. This number can drop, however, by as much as 50% during a major cyclone, which occurs every 5 to 6 years. 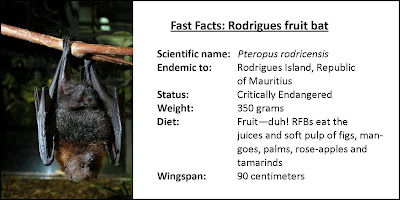 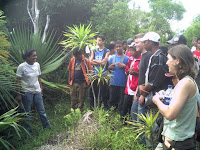 The Rodrigues Environmental Educator Project (REEP) was formed in 1998, and for the first two years the emphasis was on the bats themselves. Starting in 2000, REEP expanded their focus to include environmental issues and school programs. REEP visits 13 schools about every two weeks to conduct lessons with 5th and 6th grade children. The lessons are interactive and hands-on to bolster the teachers' standard curriculum. REEP teaches the scientific, English and Creole names for plants and animals, and takes students out on field trips: 1 to 2 trips per student, per year, during which time the students visit the nursery

and the reserves, where they help plant the species started in the nursery. They also learn field journaling. Future goals include: creating endemic gardens at each of the school sites, conducting teacher workshops, expanding to secondary schools and creating a Fruit Bat Day.

You can see the Rodrigues fruit bat at Woodland Park Zoo in the Night Exhibit. Look for the nocturnal megabats climbing around or hanging upside down in the darkness.