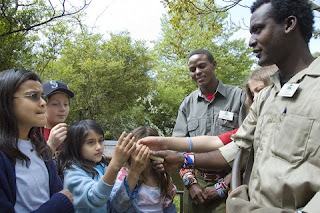 Every year, the Association of Zoos & Aquariums holds its national convention in order to allow zoo professionals to network, learn from one another and hold award ceremonies for the best exhibits and educational programs created during the previous year. This year's convention, held in Milwaukee, is no exception and we were pleased to just be awarded top honors for our Cultural Interpreter Program for last year's Maasai Journey. This program brought four Maasai gentlemen from Kenya to teach zoo visitors about their lives, and how they intertwine with African wildlife, on the savannas of Kenya. Thousands of people took part in their various programs, learning about the importance of water, thrilling to stories of their interactions with giraffes, zebra, and dozens of other wildlife species. We can't thank these four men enough for their contributions to this program: Kakuta Ole Hamisi, Sokoine Ntalamia, Kobole Partisan Ole Parsala, and Sammy Kiako Sipoi. They were able to bring to life the power, beauty and importance of the land, animals and people of the East African savanna for our visitors like no one else could! (Sokoine and Kobole teach kids about hippos with a real hippo tusk during 2007's Maasai Journey. Photo by Ryan Hawk).