Crawling to the U.K. 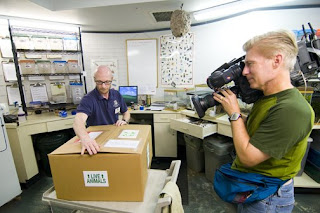 Well, not crawling actually, but 50 of our Partula snails headed off on a British Airways jet to London Zoo on Tuesday. The reason? To be part of a study prior to a planned 2010 release back into their native Tahiti. Partula nodosa, a species of tree snail, have been extinct on their South Pacific island habitat for the last 25 years. But fortunately, several were saved by scientists and have since been raised in captivity. Four U.S. zoos currently breed Partula (St. Louis, Detroit, Akron) and the program is based here at Woodland Park. The international program, based at London and working with the Imperial College, will be examining the 50 snails shipped over to ensure they are healthy and do not contain any pathogens or parasites that may be harmful once they are released.