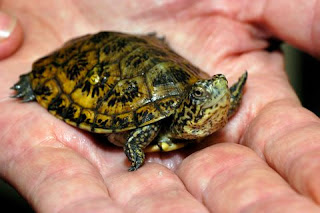 Today's the day for about 50 western pond turtles to returned to the wild. For more than a decade, the zoo has raised state endangered western pond turtles and then released them into protected pond sites in southwestern Washington state. At that time, only about 100-150 of the turtles, which measure about 8-inches long as adults and can live nearly four decades or so, were left in just a few spots in Washington (other subspecies live in Oregon and California, but are having similar problems). Why endangered? Introduced critters such as bullfrogs would gulp up the tiny hatchlings, about the size of a 50 cent piece. Also the drastic decline in wetlands and ponds to residential and agricultural development put a serious crimp in living places.

Thanks to the efforts of the zoo, Frank Slavens, former reptile curator here and his wife Kate, the Washington Department of Fish and Wildlife, Oregon Zoo and many others individuals, there are now an estimated 1,400 turtles living in sites in Washington and after today, 50 more! A team has already labeled and tagged the hatchlings, which have been headstarted to a size that's slightly larger than a bullfrog's mouth, and now they are ready to make their way in the world. We'll post photos from the release on the blog tomorrow. Stay tuned! (Photo by Ryan Hawk)

Anonymous said…
Good work WPZ. And that little turtle is so dang cute!