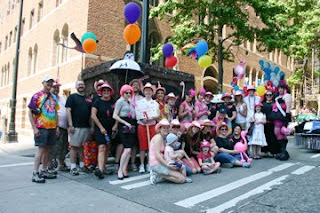 This Sunday, more than a dozen zoo staff, volunteers, Zoo Corps teen interns and friends participated for the first time in Seattle's Pride Parade. Despite the 90 degree temperatures, everyone was decked out in their finest pink duds to promote the zoo's new Chilean flamingo exhibit. We received an overwhelming response from parade-goers with nearly a dozen people asking if they could march along with us! Our contingent grew to nearly 50 people as we made our way through an estimated crowd of 400,000 people to Seattle Center. We want to express our appreciation for everyone who turned out for the parade, both those who marched and those who cheered us on. Hopefully we'll return next year with a penguin-themed group to celebrate Pride and our new Humboldt penguin exhibit!